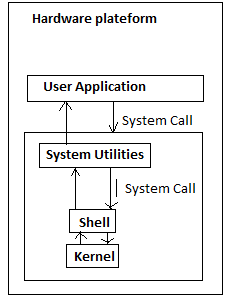 It act as an interface b/w Operating System & other hardware resources. it is the main part of operating system that load first & remains in the main memory.

What is Shell ? & How Create A Shell Program ?

It consists of various system interrupts & system calls which are to transfer the control for the kernel mode containing the kernel & Shell for further Execution of command .
The control can be transfer using system calls. “system call is an interface   b/w a process & the operating system.
“In single words the system calls is request for running any program & for performing any operation one the system that the user has requested.
system calls are different types.

The Application which a user requires to perform its task.
How to Install Kali Linux VMware in Hindi || काली लिनक्स VMware कैसे इस्तेमाल करना है

The Resources of the system such as Keyboard , Monitor , Printer etc. with which user can input-output the request are supported by the Linux.

Thanks for visit our site .If it has been helpful for you, then definitely share it with your friends and if you are not getting any topic, then please let us know by commenting below, we will add it ASAP.

we always try to make the best notes available to you. If you want notes for other subject or topic, then you can commenting below.